LoRa-based low-power wide-area network (LPWAN) technology is not only an attractive solution for long distance outdoor connectivity; it is also extremely convenient for use in buildings. One of the flagship projects in this field is geolocalization infrastructures in potentially challenging buildings due to thick walls and interference by electrical equipment. The benefit LPWAN delivers is the capability to communicate over long distances, bringing the number of infrastructure components down to a minimum.

Connected distributed sensor and controller networks for monitoring, management, and maintenance purposes are the motor driving the Internet of Things (IoT). One of the major challenges is providing reliable connectivity and data exchange with distributed sensors and controllers over long distances, starting from just a few hundred meters and reaching up to several kilometers. The challenge is to meet the ultra-low power consumption requirements of the distributed sensors and controllers, and to enable reliable and cost-efficient data exchange. Local wireless technologies do not provide the broadcast range. Cellular technologies are too expensive and consume too much energy, so new technologies in both rural and urban areas are needed for these Low-Power Wide-Area (LPWA) connections that are major drivers behind the progressively high growth rates of machine-to-machine (M2M) and IoT applications (Diagram 1). 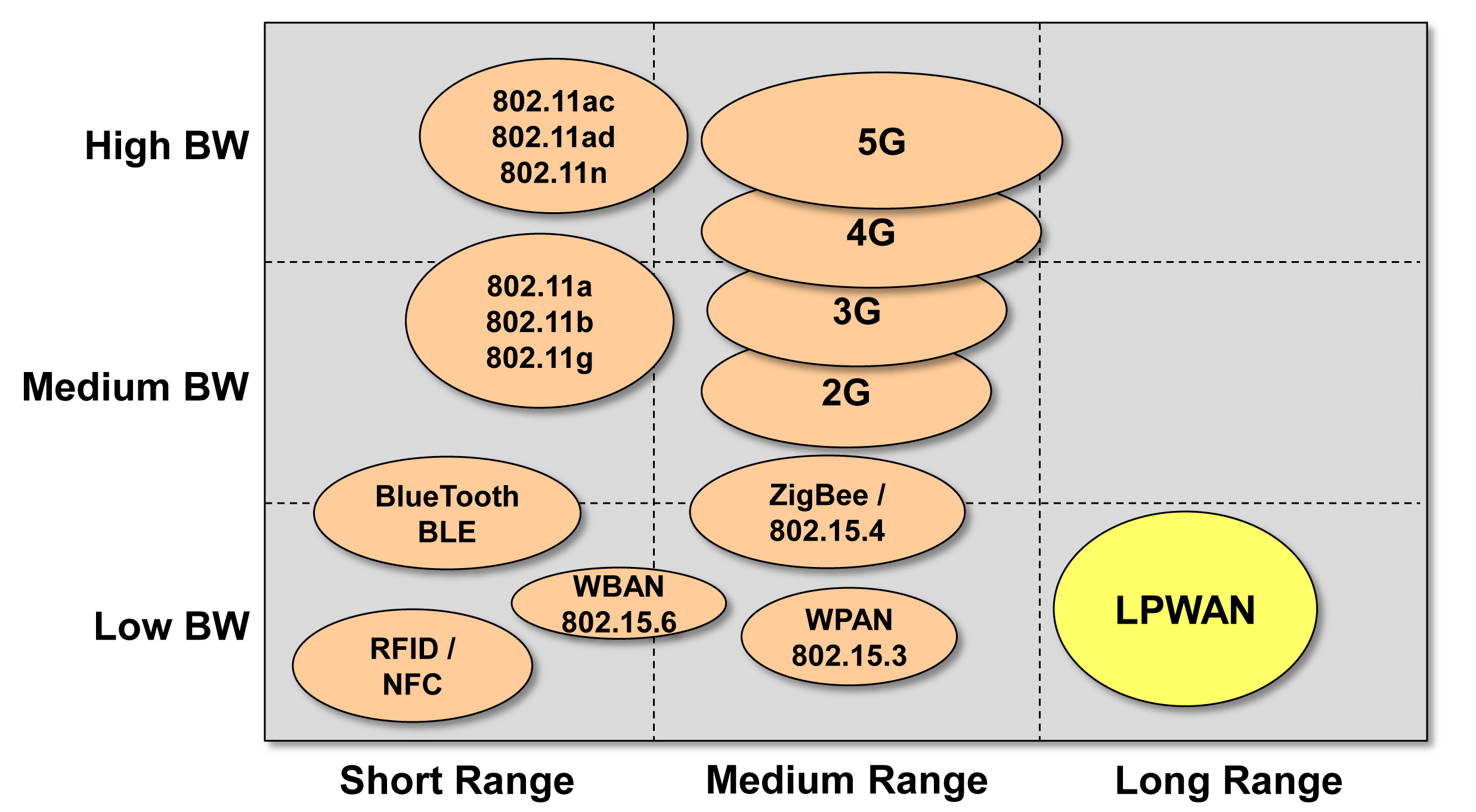 While the total number of M2M connections will only grow from 5 billion in 2014 to 27 billion in 2024 at a CAGR of 18 percent, LPWAN is a market that is expected to grow at 93 percent CAGR in the period 2016-2022, reaching 14 percent of the overall M2M connections in 2024. Market intelligence firm SNS Research even expects that LPWAN connections will reach more than 77 percent of the global wide area M2M connections in 2030. Today, Western Europe has the largest share of the LPWA market, as the countries in this region were early adopters of these information systems. However, major smart city projects in China, Singapore, and India are also driving the growth.

[Table 1 | SNS Research expects most of predicted IoT volumes in 2030 will be in the LPWAN space. Table via LoRa Alliance.]

LPWA connections can be made available via different technologies. One path is based on a cellular-type infrastructure with telecom-like base stations. Examples are Sigfox or Huawei (cellular IoT), which get deployed as open networks for everybody’s usage. Most commercial users, however, prefer private networks due to security concerns.

One of the technologies for this market segment is LoRa. It uses a star topology for a bidirectional connection between devices like sensors or actuators, and one or several gateways that can,(if supported) immediately forward all data via standard IP technology to a central cloud server. The data rate between the devices and gateways ranges from 0.3 kbps to 50 kbps. LoRa also encrypts all data via AES encryption technology by using a 64 bit unique network key, a 64 bit unique application key, and a 128 bit device-specific key. The single-hop wireless connection uses the unlicensed 868 MHz frequency band in Europe and 915 MHz in North America. By this, operators do not have to pay for third party infrastructures and licenses, which helps to reduce cost.

The maximum capacity of accessible end devices or nodes for a LoRa gateway depends on the number of packets the gateway has to manage in a given time frame. A LoRa building block for a gateway with eight channels can process up to 62,500 packets per hour. This equals the maximum amount of devices a gateway can handle if it is configured to send only one packet per hour. The maximum range in urban environments with no direct line of sight and deep indoor coverage ranges from 2 to 10 km. In suburban areas, up to 15 km can be achieved and 40 km for areas with a direct line of sight and few interferences.

To balance battery life and signal strength, the LoRa network server uses an adaptive data rate (ADR) algorithm to automatically define the optimal performance under the local environmental conditions. The algorithm is based on advanced information such as signal-to-noise ratio (SNR), received signal strength indication (RSSI), and different channels to optimize signal strength and power consumption for each end device individually. As a result, end devices can achieve a battery life of up to 105 months with a 2000 mAh battery, which is about 10 times more than current cellular-based protocols offer.

Besides the technological aspects, LoRa receives great industry support, which has helped to accelerate its global rollout. In July 2016, for example, KPN made its LoRa network available throughout the Netherlands for IoT applications. In February 2016, Semtech and Digimondo announced the rollout of the LoRaWAN IoT network in Germany. The network infrastructure, which was tested in Hamburg and Berlin in 2015, has been approved for further deployments in Munich, Frankfurt, Stuttgart, Düsseldorf, Essen, and Cologne, as well as in rural areas where volumes are secured. Soon, it is expected that the network will be open to outside enterprises.

This setup makes LoRa one of the most interesting LPWAN technologies for countless applications. Target application areas include IoT and M2M installations in smart cities and industrial applications such as agriculture, infrastructure, utilities, and logistics (Table 2).

[Table 2 | The LoRa protocol for low-power wide-area networks can be deployed in various markets.]

One interesting pilot project designed with LoRa is a supervision system that includes the safety-critical localization of mobile objects in complex buildings. This deserves the title “flagship project” for several reasons. First of all, it shows that LoRa has not only been designed for rural or urban outdoor application, but also works well in pure indoor environments, and is consequently universally applicable. Secondly, it demonstrates that a LoRa network is also a good choice for transmitting geolocation data in buildings: LoRa sensors in non line of sight (NLOS) mode can be reached within a radius of up to +2km (1.2 miles), making it more attractive by far than various short distance protocols, such as Zigbee interconnects that are only capable of reaching a maximum of 100 meters for a point-to-point connection. LoRa offers the benefit of minimizing the number of beacons connecting to the mobile devices.

The geolocalization in this application is made possible by a triangulation algorithm programmed in C and executed on a LoRa gateway designed by the French company EXEMB (Figure 1-2). It measures the time of flight of an ultra-wideband radio beam between the mobile devices and a set of fixed LoRa-enabled beacons distributed at regular intervals in the building complex. Each of these LoRa beacons has a LoRa transmitter module that sends the received data to the central LoRa gateways, which then communicate with the central control room to show the location and status of the tracked devices in a 3D floor plan. At the LoRa gateways, a preprocessing code compiled in C is carried out and, finally, this consolidated data is transferred to a triangulation algorithm determining the location of the mobile devices. The combination of UWB radio beams for geolocalization and the transmission of this data via a LoRa network is a particularly efficient solution as it offers both extremely accurate UWB radio beams and a low bandwidth wide range spectrum modulation of the LoRa network to reliably trace information without any loss of data.

[Figure 1 | The LoRa gateway is an ARM- or x86-based system with Qseven modules.]

[Figure 2 | The gateway is built on the basis of Semtech SX1301 Base Band Processor.]

As in the example of the building complex with thick walls, geolocalization is a real challenge in terms of both the localization itself as well as a establishing a reliable wireless communication. When the LoRa beacons are ideally positioned, triangulation can be as accurate as 1 meter. The LoRa network dimensioning point for applications depends on the complexity of the architecture of the building (thickness of walls and floors as well as gratings), the disturbance by metallic masses (drums, vats, gratings, etc.), and radio interference caused by electrical machinery. In the real-life application, the building had thick walls, some of them constructed with reinforced concrete and housing numerous machines adding electrical interference. Despite these limitations, building a LoRa network with nodes able to reach the mobile devices within a radius of 200 meters and LoRa beacons only having to be placed every 400 meters sufficed. This is a high-density installation, as LoRa can reliably connect for up to 2 km within standard buildings in NLOS mode, so there is a great amount of potential to save money for the infrastructure by substituting low bandwidth network technologies offering shorter distance capabilities.

Another interesting thing about geolocalization is the fact that approximately a third of IoT applications will be critically dependent on geodata, and 60 percent will potentially include geodata in the application, according to Machina Research. It is not surprising to see that there are already various solutions available for LoRa-enabled GNSS tracking.

On the introduction of the LoRa 2.0 revision, geolocalization without satellite signals will also become possible. It will offer extremely power-efficient, GPS-free location capabilities by using “differential time of arrival techniques” to determine the approximate location to the nearest block of houses in a city. This new LoRa geolocation solution is enabled by version two LoRaWAN gateways that share an accurate, common time base and add an ultra-high resolution timestamp to every LoRa data packet received. Each higher-level base station reports the time of arrival and supporting metadata. This enables location solvers based on differential time of arrival (DTOA) algorithms to determine the end node position to the nearest block.

All LoRa-enabled end nodes are supported natively, which eliminates any impact on the bill of materials. Furthermore, network-derived geolocation does not require any additional processing on the end node maintaining the standard extremely low-power consumption of LoRa. Another benefit is the enhanced security, as over-the-air messages do not contain any positioning information. On top of the standard 128-bit AES encryption, this prohibits access to, or vulnerability of, asset or personal geolocation information. There are, however, certain limitations for application use. With a 10 percent error rate for a single packet using 11 gateways in an urban environment, the positional accuracy is around 500 meters. This means that a person’s or object’s location will be within determined 90 percent of the time within circle of about a 1 km radius. Therefore, for any geolocalization in buildings, the best solution is to keep LoRa technology primarily for the infrastructure.

Dan Demers is the Director of Marketing for the Americas at congatec, Inc. He holds a B.B.S. degree in International Business from Grand Valley State University, Grand Rapids, Michigan and an M.B.A. from Ashford University, Clinton, Iowa. Mr. Demers has over 19 years of experience in embedded computing, having worked with Fortune 500 companies in the industrial, medical, and communications markets.